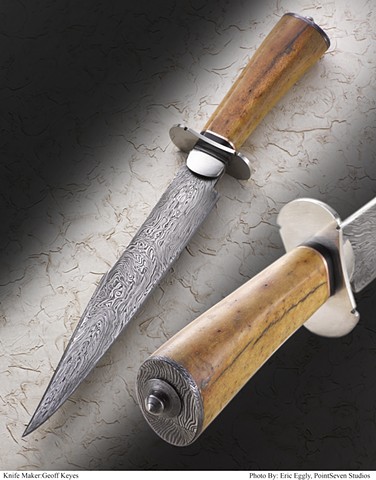 Life is too short to own bad knives

Human beings are tool users. Certain other animals; some birds, otters, and the great apes all make and use tools from time to time. However, humans are the only animals who take the effort, sometimes great effort, to make tools that are functional and beautiful.

In part, I make things with my hands because so many of our possessions are made by faceless machines. I feel the need to have things around me that are unique, made by a person who cared.

In the early days of the twenty-first century most of the things we own are mass produced. Quantity is more important than quality. So long as there are plenty of them on the shelves, the quality of them is secondary. A lot of us have never owned a hand crafted object; one made by a real person who cared about the object he or she was making. In the twentieth century “hand made” came to mean “crude, poorly made, junk.” But a few people continued to make objects with care, one at a time, by hand. I have had the opportunity to learn from a few of those people and now it’s my turn.

So, is a hand made knife (or anything else) better than the one you can go down to your local hardware store and buy for $30? Yes and no. A badly made knife is a bad tool no matter how you look at it. But a well made one is a superior artifact in all ways. I believe that my work is superior to most of the knives available in the market. After all, only a few tools today are made by craftsmen. I take great care with every piece because I want it to be the best I can make it, and I want you to feel the care and energy that went into the knife. Nearly all of my blades are differentially heat treated, giving the blade a hard cutting edge and a tough, springy spine. The effect is a knife that will hold a sharp edge longer, and is capable of withstanding a huge amount of torque. The best of my blades can be bent 90 degrees or better without breaking, not that you would ever want to do that to a knife.

All of my blades are forged with a hammer and anvil. Why do I do this, you may well ask? It’s a lot of work, after all.

First off, I do it because it is a tremendous amount of fun! You’ve got a 2000 degree piece of steel in one hand and a hammer in the other. When you get done you’ve taken a piece of nothing in particular and turned it into this thing that only existed in your head when you started. Now that may not sound like fun to you, but to me, its right up there with the best experiences I’ve had.

Secondly I do it because it’s hard to do at all, and even harder to do well. If it were easy, everyone would do it.

Thirdly, it is very satisfying for the inner me to make a connection with all of the smiths and artisans that have come before.

So there you have it. An artifact that is a superior tool, art you can carry, and a link to the first human who picked a pretty piece of stone, rather than a plain one, to make his knife. From my hand to yours.